skip to main | skip to sidebar

How many Great Walls are there in China?

Many, that would be the quick answer. It may be surprising to many readers that there is not one single Great Wall in China but a number of walls of varying length and age. While this does not take away from the incredible accomplishment of building the Great Wall(s), it deserves a deeper look.

HISTORY
China is naturally protected on 3 sides by mountains, desert, and ocean. The north was always perceived as the weak side, potentially bringing danger. Going back more than 2,000 years China was a conglomerate of 7 fighting kingdoms engulfed in almost constant battle for more than 250 years. The strongest of the kingdoms finally succeeded in uniting the country and started the history of imperial China by crowning the first emperor, Qin Shi Huang (= the first emperor of the Qin) in 221BC. Only one year later, the construction of the Great Wall began by connecting several walls of the individual kingdoms and adding on to them. Emperor Qin also destroyed some of the walls dividing his empire. It is not known how long this original wall was, it was located much further north than the current wall, and – unfortunately – most of it has fallen victim to the times.
Following the Qin dynasty, the Han were eager builders of several walls to protect themselves from attacks from the northern Huns. In the first century BC, three major walls were combined with the Qin wall and created the longest wall ever in Chinese history, estimated at a length of over 6,000 miles. Through battle, the Han dynasty extended their reach far beyond the wall/s and stopped building. 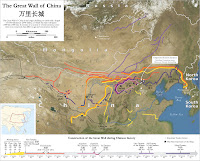 Over the next 13 centuries, several dynasties added, maintained, repaired, and improved on parts of the wall that had fallen more and more in disrepair but no major projects were done. With the start of the Ming dynasty (1368) and increasing threats from the north by the Mongols, wall construction was reborn, first by seriously improving the existing, centuries-old wall/s, then by creating new walls and using a new material: bricks. This is the Great Wall of today, still strong and standing proudly for more than 5,500 miles.
In 1987 the Great Wall of China became a UNESCO World Heritage Site.
CONSTRUCTION 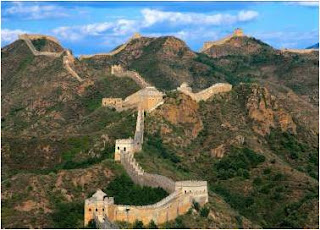 In the early days of wall construction, material was difficult to transport from one location to another so mainly local materials were used. In the mountains this meant stone, in the plains earth was stomped and pressed to create a wall. Later, granite blocks and bricks were used. It took many hundreds of thousands of construction workers, from soldiers to poor peasants and criminals. It is said that for every stone laid there is a live lost. Many of the victims are buried within the wall and remains are found by archeologists all the time.
MEASUREMENTS

The exact length of the Great (Ming) Wall is listed as 8,851.8 kilometers (or 5,500.3 miles) from Shanhaiguan in the East to Lop Lake in the West.  The wall has a total of 7,062 lookout towers (every 200 yards), 3,357 platforms, as well as 723 beacon towers. It is the longest man-made structure in the world. But the final word may still be out: Even as recent as 2009, 180 miles of previously undetected portions of the wall from the Ming dynasty was discovered, submerged by sand.
BEST PLACES TO SEE THE GREAT WALL
BEIJING – There are a total of 8 locations near Beijing where the wall can be visited. The most popular ones are described below:
Badaling: Undoubtedly the most commercialized and most visited spot of the Great Wall, about 40 miles northwest of Beijing. This part of the wall was originally built in 1571 and major repairs took place in 1957. The segment open to tourists is about 3 miles long and includes 19 watch towers. The more adventurous visitor may try the left – steeper - side of the Wall while the more moderate side is the right one.
Mutianyu: Built in the 6th century with a major renovation during the Ming dynasty, this part of the Great Wall bears 22 watch towers and the opportunity to go up by foot or cable car, and down by foot or tobagen. Spend some time in the town of Mutianyu and visit the Old School House.
Simatai: More quiet and peaceful than the first two locations, due to distance of 85 miles to Beijing, this segment of the Great Wall is right for you if you want to see the wall untouched by modern hands. Walking here can be extremely challenging since parts of the wall are crumbling away.
The other sites, more and more popular for backpackers and repeat visitors are: Juyongguan, Huanghuacheng, Gubeikou, Jiankou, and Jinshanling.
TODAY’S CHALLENGES 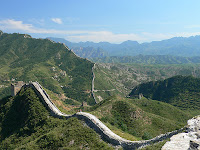 2,000 years of wars, revolution, and tourism have certainly taken its toll on this most famous Chinese landmark. Like every ancient historical monument, time is a major enemy. Considering the age and incredible size of this building, it is understandable that maintenance is one of the greatest challenges. Surveys are astonishing: Only about 30% of the Great Wall is in good shape. It is every visitors responsibility to pay respect to this site and to protect it for generations to come.
GREAT WALL TRIVIA
The amount of earth, stone, and brickwork used during construction would be more than enough to build a wall 3 feet thick and 15 feet high around the equator.
Every May, the Great Wall Marathon is held, with participants from more than 40 countries. The run includes more than 5,000 steps.
In May 1984 a group of 3 Chinese set out to walk the entire length of the Great Wall, 508 days later the task was completed.
CST China Special Tours creates special group tours to China. If you want to see the Great Wall/s, we know the right places. Contact us and request a customized proposal.
TRAVEL NEWS FROM CHINA

Tibet's first Airline begins Service - Tibet now is home to the world's highest airline, with a fleet of one Airbus A319. Currently operating within Tibet, the first flight launched in July between Tibet's capital Lhasa and Ngari.
Heixiazi Island - This small border island linking China and Russia opened as a new eco tourism resort destination, primarily for Chinese tourists. Aside from a wetland reserve and a former Russian military camp, visitors can enjoy boat trips around the island. While Heixiazi had once been the site of frequent border disputes between the two countries, a consensus was reached in 2010 to work together to make the island an attractive place for eco-tourists.
Shook! now open in Shanghai - A new dining establishment has opened its doors recently, right in the famous Bund area in Shanghai, occupying the top floors of the Swatch Art Peace Hotel. Executive Chef Kevin Cape invites guests to an eclectic choice of dishes, both with an Asian and European touch. One of the not-to-miss signature dishes is the "Dancing Prawns". Bon Appetit.
Posted by Dieter F. Schneider, President at 4:03 PM

May I introduce myself

Dieter F. Schneider, President
My first visit to China dates back to 1986: After several visits to Asia, China still remained mysterious, strange, and difficult to comprehend, - yet unbelievably fascinating. This initial fascination has grown stronger and stronger with every visit. Three decades in the travel & hospitality industry have taken me from an apprenticeship in a German travel & tour company to management positions for tour operators (inbound and outbound), an international airline as well as The Ritz-Carlton Hotel. Most recently I worked with corporate meetings and incentives, both in the US and worldwide. I have visited all continents and escorted many groups. Being a tour escort is a passion of mine since my first trip to Paris in 1978. There is something very rewarding about enriching people's lives by creating unforgettable travel experiences. I truly enjoy connecting people from different worlds. And that is one of several reasons why I started CST, to share my passion for this incredible country with groups. Please allow me to earn your trust, give me an opportunity to create your group program and let me introduce you to Your China.